Latest events and news from Spectrolab

Boeing’s Starliner program, which is developing the Crew Space Transportation vehicle, is putting into practice the "One Boeing" business model.

Because the Starliner needs to have a reliable and efficient power source onboard the spacecraft, the logical decision was to use space-based solar power like the kind upon which the International Space Station and satellites rely. As it happens, wholly owned Boeing subsidiary Spectrolab is the world’s leading supplier of space solar cells and became an obvious choice to provide power to the Starliner.

"The Starliner program needed a highly efficient, high-quality power solution, and we found the best in class within Boeing," said John Mulholland, vice president and program manager for Boeing’s Commercial Crew program. "This is a perfect example of the benefits of One Boeing."

The Starliner will use Spectrolab’s XTJ solar cells, which are made of three distinct cell layers to capture different portions of the energy spectrum. In doing so, they will efficiently convert solar energy into usable electricity aboard the Starliner and allow astronauts to complete their journey to the space station and return safely to Earth.

"Spectrolab has put its 60 years of history into the design of these XTJ solar cells," said Tony Mueller, president of Spectrolab. "It’ll be a momentous occasion when the Starliner launches for the first time, and Spectrolab will have played a unique role in that piece of history."

Spectrolab is located in Sylmar, Calif., and has provided solar cells to the International Space Station, the Mars rovers Spirit and Opportunity, NASA’s Juno probe to Jupiter and more than 700 other spacecraft.

The Starliner is in development and is scheduled to begin crew transportation services to and from the International Space Station in 2018 as part of NASA’s Commercial Crew Program.

By Matthew Barnett and Rebecca Regan 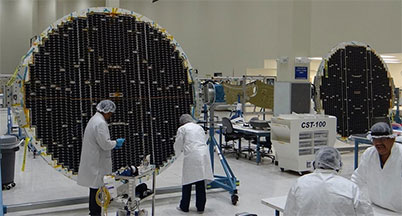