Latest events and news from Spectrolab

At almost 4 a.m. Pacific time on Dec. 5, a small brush fire erupted on a mountainside behind the headquarters of Boeing subsidiary Spectrolab in Sylmar, Calif.

Within four hours, the fire quickly grew into what became known as the Creek Fire, eventually coming within 1,000 feet (305 meters) of Spectrolab’s back door. Spectrolab’s campus and the surrounding vicinity were engulfed in smoke and ash, resulting in the facilities being evacuated for three days.

During the firefight that ensued, Los Angeles city and county fire departments, along with the California Department of Forestry and Fire Protection, activated 1,700 firefighters and their respective air operations. The helicopters attacked the fires day and night using mission equipment on board, including Spectrolab’s powerful Nightsun searchlights, which helped light a flight path through the smoke for visibility to other aircraft and firefighters on the ground.

Spectrolab searchlights also were used to combat other wildfires that raged across California during December and January.

Spectrolab President Tony Mueller said it was fitting that searchlights manufactured by the company helped protect the facility that manufactures them.

"We owe a great debt of gratitude to the brave firefighters on the ground and in the air who helped protect our employees, our campus and our community," Mueller said.

Spectrolab has supported the aviation industry with a portfolio of high-intensity searchlight models that have been used in the airborne law enforcement, medevac, fire and search-and-rescue markets for more than five decades.

The facility reopened for business Dec. 8, but the Creek Fire continued to burn for another month before reaching 100 percent containment in early January. In the end, the fire burned over 15,000 acres and destroyed more than 100 structures. 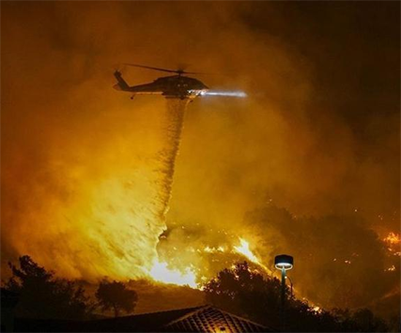