Spectrolab, Inc., a wholly owned subsidiary of The Boeing Company, is the world's leading merchant supplier of the Highest-Efficiency Multijunction Solar Cells for Spacecraft Power Systems, with proven reliability drawn from 65 years of space heritage.

Spectrolab's state-of-the-art space solar cells and panels power satellites in Earth's orbit, as well as, the International Space Station. Since its founding in 1956, Spectrolab has led the way in the development of high-efficiency solar cells for space missions. Spectrolab has demonstrated its enduring technological leadership by being the first company to place cells on the moon (Apollo 1969), on the surface of Mars (Rover 2004), and orbit Jupiter (Juno 2016). 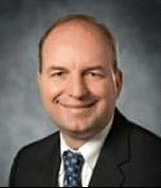 Tony Mueller
President of Spectrolab, a wholly owned subsidiary of The Boeing Company

A Powerful Measure of Confidence
Spectrolab, a wholly owned subsidiary of The Boeing Company is the world's leading merchant-supplier of the highest-efficiency space solar cells, CICs and panels available to prime satellite contractors and manufacturers around the world.  In addition to space systems, Spectrolab's high intensity airborne searchlight systems support more than 90% of the world's market and the company's solar simulators are the industry standard. Spectrolab serves customers around the world with its Nightsun® series searchlights. Its customers include law enforcement agencies around the world, the U.S. Air Force, U.S. Immigration and Customs Enforcement and the British Ministry of Defense, which uses the Nightsun® product exclusively. Spectrolab's product portfolio also includes terrestrial concentrator solar cells, solar simulators, and sensor products.

Spectrolab has built and delivered a world record 4.6 million multi-junction space solar cells. Spectrolab's legacy has produced over 4 megawatts of space grade solar cells launched to date, powering satellites and spacecraft internationally. Spectrolab's most powerful cells built-to-date – the XTJ Supercell – attained mission operations in both LEO and GEO orbits in the 1st quarter of 2017. These solar cells typically feature >3W per cell – providing customers a vastly improved value proposition. To date, over 300kW of Supercell products have been launched.

Spectrolab products have powered successful space missions, including solar panels which are in operation on Mars, as part of a reconnaissance satellite and two land-exploration rovers (Spirit and Opportunity).  Note: NASA's long-lived Opportunity Mars rover has finished its first marathon on another planet.  The Opportunity Mars rover was only planned for a 90 day space mission, but is still going strong after 14 years.

In 2016, Spectrolab achieved a significant milestone by celebrating 60 years of space heritage. Additionally, by August 2016, Spectrolab was the first to have solar cells operating on an interplanetary Jupiter mission setting a record with the furthest distance away from the sun – ever traveled by a solar powered vehicle.

The foundation of Spectrolab's success lies in our ability to rapidly transfer cutting-edge technology from a laboratory setting to a manufacturing process. Triple-junction concentrator solar cells designed and built by Spectrolab won the 2001 R&D 100 award for the most significant technologies by Research & Development Magazine's panel of industry experts. These solar cells, when used in a concentrator module, dramatically lowered the cost of photovoltaic solar electricity generation. Spectrolab worked with many CPV systems manufacturers to optimize systems using these high efficiency cells, tailored for the terrestrial solar spectrum under concentrations of 300 to more than 1,000 suns.  Spectrolab cells have set numerous world records for conversion efficiency, and in 2006, Spectrolab broke through yet another barrier, producing the first solar cell to exceed 40% efficiency.  Our solar cells consistently deliver the highest production average efficiency to CPV customers.

Transitioning to High Volume Multijunction Production
As the demand for more powerful, more efficient, and more capable satellites increased in the 1970s and 1980s, Spectrolab developed increasingly more powerful solar cells, progressing from 12% conversion efficiency of early silicon solar cell to greater than 30% today using state-of-the-art multijunction solar cells.  Once these GaAs-based solar cells were successfully demonstrated in space, and the path toward a successful multijunction technology was established, Spectrolab completely retooled its factory to produce multijunction cells. Today Spectrolab has the ability to produce nearly 500,000W (more than 30 high power satellites) per year with state-of-the-art multijunction solar cells and panels. In 1993, the company installed the world's most advanced MOVPE (metal organic vapor phase epitaxy) materials growth reactors as part of a high-capacity gallium arsenide solar cell production line, and has since largely replaced much this fleet, in 2009, with the latest generation technology.

Solar Simulators are Born Early in the development of space solar cell technology, Spectrolab recognized an industry need to test solar cells and other devices in well-controlled conditions simulating those found in space. During the Apollo 11 mission in 1969, a Spectrolab product became the first solar panel to be placed on the moon. Additionally, Bell Helicopter became the first customer for Spectrolab's first Nightsun® searchlight. At 30-million candlepower, the Nightsun® is the world's most powerful airborne searchlight and is used by many military, maritime and search and rescue organizations, including the British Ministry of Defense, which uses the Nightsun® exclusively.  In 1962, the company designed and began manufacturing both steady-state and pulsed solar simulators, which have since become an industry standard. Spectrolab then turned the light sources used to simulate the sun into an innovative searchlight product line.

During these years Spectrolab also instituted state-of-the-art process control tools such as Six Sigma and DoE and created Work Center Teams to focus engineering, manufacturing, and equipment expertise on each process step.

Firsts in Space PV
Spectrolab was established in 1956, when local entrepreneur Alfred Mann brought together a group of engineers to provide high-quality optical filters and mirrors for use in government contracts. Since its founding, Spectrolab has led the way in the development of high-efficiency solar cells for space missions.

Spectrolab established its credibility in the space industry with Pioneer 1, in 1958, carrying the company's first body-mounted solar panels; Explorer 6, the satellite that in 1959 provided the first photograph of Earth from space, supplied with Spectrolab's first solar arrays; the Syncom satellite, the first satellite placed in geosynchronous Earth orbit; and the historic Apollo 11 mission in 1969, which included the installation of the first solar panel on the moon.  Since those early days, Spectrolab has been the world's leading supplier of space photovoltaic solar cells and panels.

Entrepreneur Alfred Mann, with other founders and engineers, breaking ground to start Spectrolab in 1956. 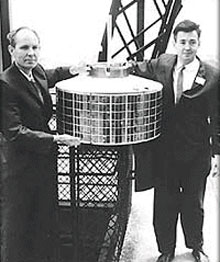 Tom Hudspeth (left) and Harold Rosen (right) of Hughes Aircraft Company, atop the Eiffel Tower with a model of Syncom, the first successful geosynchronous satellite. 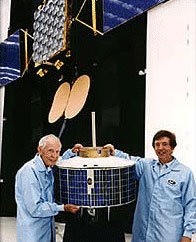 Tom and Harold 30 years later, near a full-scall model of Syncom's sophisticated descendant, Optus B.

Spectrolab Inc., a Boeing Company, is the world's largest manufacturer of spacecraft solar cells. In 2009, Spectrolab broke another industry record when it announced the completion of its latest technological innovation, a solar cell with the ability to convert 41.6% of the sun's rays into electrical power, a first in the solar cell industry.  This was verified by the National Renewable Energy Laboratory of the US Department of Energy.

Spectrolab is headquartered in Sylmar, California, about 20 miles northeast of Los Angeles. The company was founded in 1956, and is one of the world's leading suppliers of photovoltaic solar cells, solar panels, searchlights, and solar simulators. Spectrolab has been supplying solar array panels to the space industry for 60 years.

In 2000, Spectrolab was purchased by the Boeing Company.  Spectrolab still resides on the original site in California's San Fernando Valley.

Be part of this success story, apply for one of the job openings currently available at Spectrolab. We offer a competitive benefits package, which includes a variety of options in health and life insurance.

Stay safe from recruitment fraud! The only way to apply for a position at Boeing is via our Careers website. Learn how to protect yourself from recruitment fraud. Boeing is an Equal Opportunity Employer. Employment decisions are made without regard to race, color, religion, national origin, gender, sexual orientation, gender identity, age, physical or mental disability, genetic factors, military/veteran status or other characteristics protected by law. 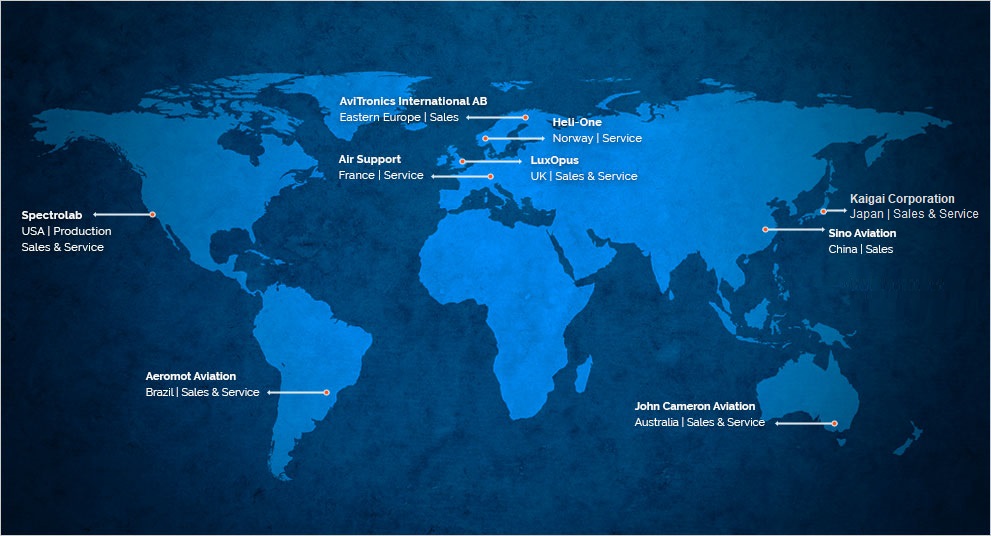 You don't want your personal information to fall into the wrong hands. Neither does Spectrolab.

When you visit Spectrolab's web site we may ask you to provide us with information about you and your interests, such as your name, employer, mailing address, telephone and facsimile numbers, E-mail address, and Spectrolab product requirements. Some of this information may be personal information in that it may be personal to and could be used to identify you.

As a valued customer, potential customer or business partner, Spectrolab will treat that information as proprietary and competition sensitive. You are providing that information only to Spectrolab. We may store it in our company's files and use it for customer service and support, marketing and market research, and for administrative and other purposes that we deem necessary to maintain, service, and improve our products and services.

Though we may share personal information with Spectrolab affiliates where appropriate to provide you with better support for Spectrolab products you may own or wish to buy, as a general rule, Spectrolab will not disclose any personal information except when we have your permission or under special circumstances, such as when we believe in good faith that the law requires it, or when we have reason to believe that disclosing this information is necessary to identify, contact or bring legal action against someone who may be causing injury to or interference with (either intentionally or unintentionally) Spectrolab's rights or property, other Spectrolab customers, users, or anyone else that could be harmed by such activities.

You take online privacy seriously, and so does Spectrolab. It's our way of sustaining your trust in Spectrolab and our products and services. Therefore, whenever we ask you for information we will include a link to this Online Privacy Policy on that page.

Unfortunately, no data transmission over the Internet or any wireless network can be guaranteed to be 100% secure. As a result, while we strive to protect your personal information, Spectrolab cannot ensure or warrant the security of any information you transmit to us, and you do so at your own risk. Once we receive your transmission, we make our best effort to ensure its security on our systems.

Spectrolab reserves the right to alter this Online Privacy Policy as business needs require. Any alterations will be posted on our web site in a timely manner.